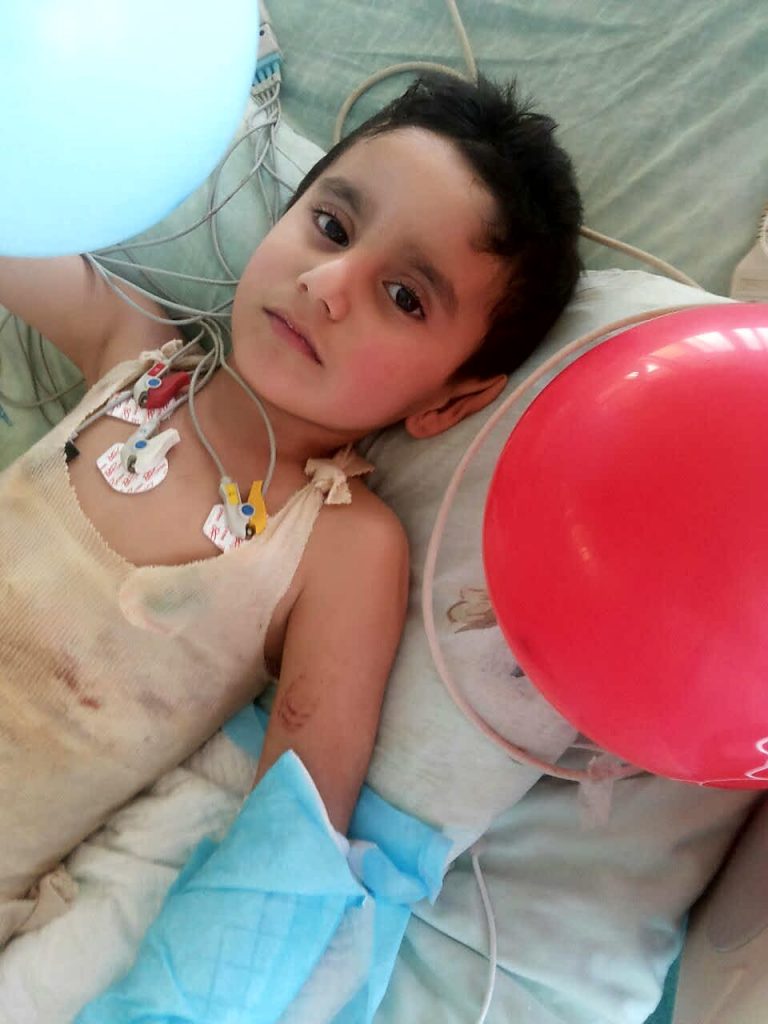 For all the tragedy and consequences of war and all the poverty around us, the story seems to always be pulled back from the brink and the miraculous prevails. So, when tragedy struck the other week, it was felt deeply by everyone here at the Life Center.
Jiwan was the young boy that I mentioned in my last blog post that had sustained severe burns on ¾ of his body. He fell in a tub of hot water that his mom had heated to wash laundry by hand. Washing machines are a luxury here. Instead, they put live electrical wires in a tub, heat until the water churns (after all if you tested the temp at any point before this you would die of electrical shock) and then they unplug the wires. His mom had just stepped away and unplugged the electricity when Jiwan tripped and fell in. He was taken to the “civil defense” for evaluation, as is the policy with the refugees. Upon evaluation, he was just sent home with antibiotics. I am not sure what his burns looked like or why someone on hand there didn’t really recognize what was going on. He should have never been turned away and just sent home with antibiotics. Understanding his injuries now, I cannot even fathom this. I cannot imagine the shock his little body was in for days before he got under proper medical care as it was 3 days before he got admitted to a hospital. This was 3 days spent in severe shock and dehydration with severe burns, no food or water and no bandages being changed. It may not seem fathomable to us from the West, but you are taking our education for granted. His parents have little education on such matters. In fact, it is not uncommon to find people with not much education at all, not even able to read trying to make their way through life here. It is just not easy for us to comprehend the differences in the education and knowledge of people here vs. the West. I hope you won’t judge but have compassion.

Once in the hospital, we were all told that Jiwan was stable and looking at a hospital stay of 10 days. I didn’t even fathom what was really going on when we were told just 10 days and had to pay for 10 days upfront. Again, I don’t think we comprehended the severity of the burns. In this country, you don’t get medical treatment unless you pay up front. That means that if you cannot afford it, you don’t get treatment. Jiwan wouldn’t have even got into a hospital unless the ministry hadn’t  coordinated with the UN, and also reached into its emergency fund and the pastors all vowed to forfeit their salaries (believing God would provide for them) just to make sure he got treatment.

A week later we were told we were looking at a 30 day stay and he needed skin grafts. Jiwan was still looking like a precious angel hanging in there in the photos sent to us from the hospital far away from Beirut in Tripoli. We were busy working on finding the funds to pay for the continued treatment. Meanwhile, he was in need of blood transfusions and no one could find O negative blood. Apparently, there are no blood banks here (or no blood in the banks). If you need blood, you must find it yourself. This is the 5th story in the time that I have been here of someone in the church needing blood and having to go find it, often at the peril of losing their life in the process. In fact, Jiwan’s mother was saved when people from the church all donated blood to save her life.

Then, eight days after he was admitted, I was sent a picture of him intubated. How did he go from being awake and alert to sedated and intubated? I was very alarmed. I thought he was in serious but stable condition.

Only two hours later he was dead.

This news of his tragic death was shocking and heartbreaking to all of us, but none more so than his parents. Their heartbreak is unfathomable. I am not even a parent but I feel the worst pain that anyone can endure in life is having one’s child die.

Everyone at the church and school knew Jiwan and tears flowed freely all the following day as the entire staff and other members of the ministry and church family tried to grasp the tragedy and loss. We were heartbroken to say goodbye. Several days later, we hosted family and friends for condolences at the Life Center. It was conducted as best as possible in Kurdish tradition, honoring his family and heritage.

So many people from around the world reached out as they followed this tragic story. I am grateful the prayers, condolences and financial support. Due to the immediate response by people from around the world, we were able to ensure that Jiwan did receive medical care and that the hospital never turned him down for any prescribed treatment. I only wish that it wasn’t too little too late.

The donations were also used to help support the cost of living basics such as housing and food for the family as the father was not working during the ordeal and would not have been able to cover otherwise.

We are exploring what projects we may be able to do in Jiwan’s honor to benefit other children in the near future.

Thank you for your thoughts and prayers and please continue to keep his parents in your prayers as the days ahead will be far from easy.