I first saw her on a Sunday morning. She was a new face and it was her face, framed by her bright blue hijab, that first caught my attention. I thought she was beautiful and it was also the first time that I looked at one of the ladies and felt something in common, I thought that she must be around my age.  The ladies always seem much older or younger than me and all of them have been aged considerably by the war. Though she was on the other side of the church, as I was viewing her from afar, I felt a kindred spirit and I was anxious to meet her!

She stood in front of church to tell us her story, prompted by the family that had introduced them to the church. Her extroversion was remarkable. She had just arrived from Syria to be reunited with her husband after a 4 year separation.  He had been raising 2 of the children on his own here in Lebanon while she had the youngest with her in Syria.  They had been in the process of getting a divorce. Her husband met a man from the church who heard their story and offered to pray for his family to be reunited.  The miracle was that when he prayed, she woke up filled with an overwhelming desire to come back to her family. Two days later she was in Lebanon, reunited with her family for the first time in 4 years. She may be in Lebanon with her family, but I quickly learned that where they were staying was far from easy or even a safe place. In fact, where they are living is inhumane.

I had the opportunity to meet her the following day and learned her name is Fadia (all names always changed for privacy).  She introduced herself and greeted me warmly with the standard Middle Eastern kisses.  She looked me in the eye, and spoke clearly and confidently.  This was such a stark contrast from the typical attitude and reaction of the Syrian women to other women. Not only are they nervous and skeptical of other women, but they lack general confidence in themselves, they don’t make eye contact and mumble when they speak.  At least at first. Most women you meet or see out and about seem to have lost their soul. Their eyes are just haunted ghosts and they are mere shadows of who they used to be. Life is hard here, after all. Very hard.

With her vivid personality, as bright as her hijab, I could guess why her and her husband must be having problems. She didn’t seem like the kind of person that would tolerate the way most wives are treated around these parts.  Maybe it is this little spark of a rebel spirit that made us so drawn to each other because she seemed to like me as much as I like her!

Abu Isma-il, who had brought them to church and was introducing me, told me how Fadia’s family didn’t live in a house, just a carton with plastic and boxes. There is not even a bathroom.  They had been walking to Abu Isma-il’s tiny apartment to shower every few days. The husband doesn’t have a job and when he does, I later learned, he frequently leaves his children with a strange man in this bizarre place that sees a stream of men come and go.  The thought made me feel sick at the possibility of exploitation. Child exploitation is a very common thing here, unfortunately.  Very, very common.

Fadia wanted me to come and see their dwelling and tell their story, so the other day I accompanied the head of our refugee relief program out there.  It was only about a mile away from where our center is located, but the area was even worse than what I had seen before in the Nabaa.  The run down conditions and utter filth made my stomach turn.

The area was a literal dump. There were tractors dumping mounds trash by the side of the road. I could only imagine the rats and vermin there.   This was also a trash sorting area, where some people have the unenviable job of sorting out some plastics and the cardboard from the garbage.  I was hit with momentary relief that maybe there was a little bit of recycling effort in this country after all.  I had believed that there was no recycling efforts since I arrived to Lebanon.  There was a mountain of plastic water bottles piled high beside the road. I am praying that they actually recycle this. Their plastic usage makes the US look modest in comparison. 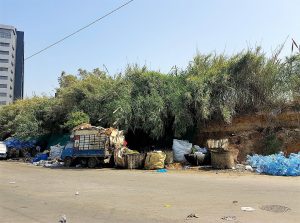 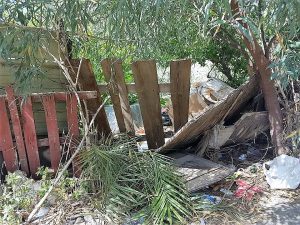 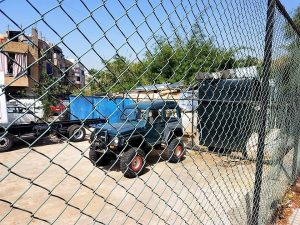 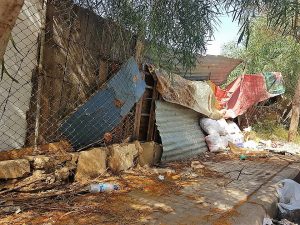 There was a fenced in area amongst the “dump” with a small field of compactors, maybe trash or cardboard. Or both, I am not sure.  In this area was the makeshift dwelling –  a mix of tin, tarps, plastic and cardboard.  Here, they seemed to take the compacted cardboard and bundle it up.  There were massive piles of cardboard sitting amongst litter and trash.  An old man was overseeing this operation;  this was the man that would get involuntarily stuck with babysitting duties, I figured.

We weaved our way beyond mounds of cardboard and litter on the floor to the back of the shack where ventilation and the heat of the approaching summer made the place stifling.  The children were passed out asleep on the floor among blankets.  The little girl was still in a long sleeved shirt and I figured that they were probably too hot to even move.  Our guests quickly jumped to find us some plastic chairs. The white chairs were broken and stained brown from filth. Probably salvaged straight from the dump.   Fadia was all too aware of their dirty condition and put some clothes on the chair to try to make it more suitable for me to sit in. 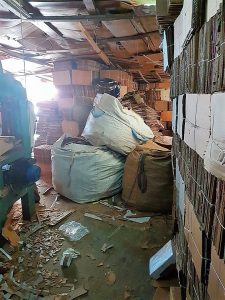 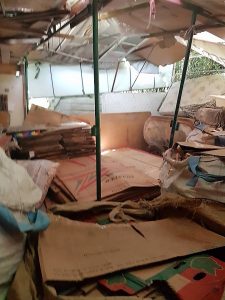 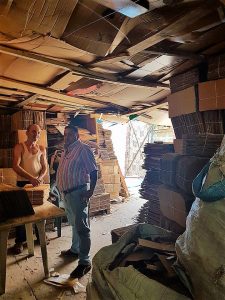 In the privacy of her “home,” our hostess quickly removed her hijab.  I was surprised at this, since she was still in the presence of a man who wasn’t her family member.  I have not seen any of the women here remove their hijab in their home when we have been the guests. I have not seen the women remove their hijabs at all.   Like I said, I detect a bit of a rebel streak in her. I sense that she is anxious to not conform to the ME way of doing things.

The conversation was fast and I tried to listen and follow the best I could. Her frustration with her situation was apparent, as was her strong personality.  She didn’t want to be married to her husband, a simple man maybe 25 years her senior who couldn’t even provide appropriate housing for his family.  I imagine she got married very young and it was likely not her choice. On top of frequently getting married off as teenagers (especially Syria more than Lebanon),  wives are never treated well here. They are treated more like slaves and if they don’t fall in line in every area and always please the husband, the husband will just move on to wife 2, or 3 or 4.  They live in fear of this possibility that is lorded over them.  Women don’t have much education and they cannot provide for themselves. They are completely dependent on their husbands to look after them. Of course, this impacts their self-image and self-confidence. That is partly what creates their reticence with interacting with new women they encounter. They likely always regard other women as the competition – the husband stealer.

Fadia is not used to such a lifestyle as she is currently in and she is having a hard time accepting it. She doesn’t want to be dressed in dirty clothes, unable to shower, not sure where food is coming from. She doesn’t have glasses, she cannot even see.  They could have food and shelter in Syria.  Yeah there is a “little bombing and sometimes shrapnel here and there,” but that doesn’t seem like that big of a deal to her.   She is tired of trying to make the marriage work and tired of being treated poorly.  She will leave the eldest boy with her husband and take her daughter and youngest son back with her.  The poor eldest boy, a tiny lad of 6 or 7, looks completely traumatized and wounded by this idea.  I am always shocked at how openly parents here talk in front of the kids about things that are very harmful to a young child’s psyche.

I am not sure what I feel about her husband and I sort of feel like I would want to leave him if I were in her shoes. Not sure returning to the war zone is the answer; it is really no place for the children.  And what about the son she’d leave behind? Again, my stomach turns to think of this 6 or 7 year-old boy left in the hands of some strange man when his father would go off to find work.  I know we can help them and help her with spiritual and emotional healing beyond what will happen if she goes back to Syria.  She wasn’t happy there either.  Syria is not the magic solution.

I encouraged her that I wasn’t trying to talk her into fixing her marriage, but just staying in Lebanon for the sake of the children and herself.  We had an NGO pledge some money toward rent and I promised that I would help with some rent as well.  Before we left, I held her hand and offered a prayer over her and the family.  I asked if I could snap a few pictures on our way out.  I felt embarrassed to be making them a spectacle and thus rushed to take them, hands shaking in the process, so they are a little blurrier than most.  But I wanted to be able to share and try to help others understand. 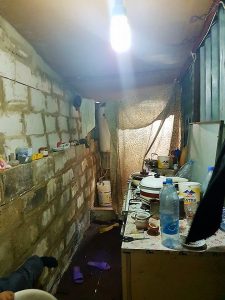 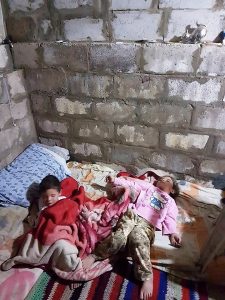 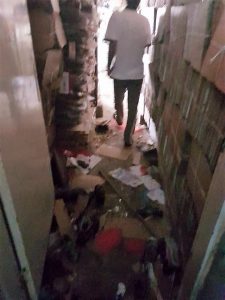 The prayer seemed to work. That evening, I was pleased to see her and her children at our Wednesday evening service.  She told Abu Isma-il that she had been filled with peace after I prayed for her in the afternoon.  Abu Isma-il translated for me as I don’t always understand everything she says, even when I should understand all the words. Ironically, he is translating for her by speaking more Arabic as he doesn’t know any English either.  He is more understanding of my limited language abilities and speaks slower and in simpler sentences and I am able to understand him better than most of the Syrians.  After receiving a quick update, He encouraged Fadia to have patience with her situation.  Yes, I know this word in Arabic quite well.  I repeat it to myself probably daily.  I am like Fadia in that I know how things should be, how I want things to be and I am always anxious to try to fix things quickly and on my own.  Sometimes we have to be patient and understand change doesn’t happen overnight.

The children were with her and they looked like they haven’t bathed in a week. Their clothes had probably not been washed in even longer than this.  Their eyes were so sad, showing the scars and trauma of war, of their parents fighting over them, of the demoralizing and inhumane conditions that they have been in.  You never know how many opportunities to interact with children you will be given, as families frequently disappear in the blink of an eye.  Therefore, I have made it my policy to let children know that they are loved and feel special in the very few words and few minutes I may ever have.  I hugged these tiny humans and kissed their dirty cheeks while praying with all my might that they might know their true value and worth and praying that I would have the opportunity to see them again.