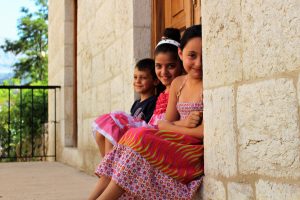 Many people would love nothing more than to return to Syria some day. They are unregistered in Lebanon and cannot legally work and thus cannot obtain a salary enough to support the family. The minimum wage is $500 but the average income for the Syrians is half of this.  Rent in the Naba’a  neighborhood run by slum landlords is around $400-$500 for a small, unfurnished room.  People are drowning in debt to stay alive!

Many people have sacrificed everything by the choices that they have made.  See, men under the age of 50 are considered of military age.  Many ran away from fighting in a war they didn’t believe in, not thinking about the consequences once the war was over. Their only thought was survival for that moment. Those who escaped Syria are considered deserters and will pay a high price from Assad’s regime if they are to return.  Trust me, Assad doesn’t just let bygones be bygones. Look at how he has used chemical weapons on civilians to punish them for the war (as the speculation by experts goes).

In addition to the challenges brought on by men escaping Syria with their families, there is the problem of faith.  See, there are many in Lebanon that have converted from other religions, including extremist backgrounds, to Christianity.  What they didn’t lose in the war was lost for then when they made this decision. It has cost them everything!  Family, friends, and members of their old community have rejected them, threatened them, abused them and sometimes tried to kill them.  They are apostates, after all! This is worse than being an infidel.

I know a man whose son was kidnapped by extremists (and then a harrowing rescue), house targeted blown up and barely escaped Syria with his and his family’s life due to their conversion to Christianity.

Another man I know has lost his land and his inheritance due to his faith.  His family regularly calls from Syria to threaten him and pressure him to leave his family.  There is nothing for him back in Syria unless he were to leave his Christian family behind in Lebanon and renounce his faith.

Sometimes people endure abuse and threats just for allowing their children to attend our school program as they are associating with “pigs, dogs, and infidels.”  I have heard those messages of threats that have been forwarded around.  That is the great thing about WhatsApp. Be careful what you send as a voice message. No one ever said ISIS was that smart though.

A beautiful young family started coming to church not too long ago. Their mother has been faithful at attending for a long while. She has endured imprisonment, threats, and abuse from the Syrian government when she was there.  Reading between the lines, I think they thought that her family had rebel or terrorist connections.  So, she has been there and done that and maybe that is why she is OK with the abuse that comes with having embraced a new faith.  However, the abuse and threats that started rolling in when her children started coming with their small baby were too much for them.  We won’t see them around the Life Center again.   This is a story that has repeated too often.  Sometimes a family receives a threat and just disappears.  I cannot tell you if they are OK or what happened.  We do not know. Maybe they just moved locations, maybe it was something more sinister.

The invisible ones. There is no one to stand for them when they endure abuse.  A lady and her family were threatened to be killed by a member of an extremist group based here in Lebanon (and considered a terrorist organization by the USA). Her sin was that this man was pressuring her to sleep with him and she wouldn’t do it.  We couldn’t get the police involved because it is too dangerous for her as she and her family are unregistered refugees.  I am sure this fact did not go overlooked by the abuser.  They know exactly what they are doing when they prey on the most vulnerable in society.

The people here feel in limbo.  They want to travel. Somewhere. Anywhere but here. They dream of a life with stability and without the worry of money for a roof over their head and where the next meal is coming from. Everyone who has asked me to pray with them is anxious about the opportunity to travel to somewhere.  Not everyone will get the opportunity to immigrate to America, Canada or Germany.  Even those that will travel are as scared as they are excited. They are terrified of being someplace where they don’t know the language and having to adapt to a new culture.  This is a very real challenge.  Many of these people barely have a grade school education and don’t even read or write.  Imagine trying to learn a new language or two when you don’t even read and write in your own language!

So many families travel every week and yet there are still so many waiting for their chance while dreaming of hope beyond the depressing streets of Bourj Hammoud.  Their hearts are happy for those who get the chance to leave and equally broken that their time hasn’t come.  It is a hard place to be to feel so transient and so unsettled.  I should know. I have only moved over 10 times in my life and still looking for that place to call home.

An image seared into my mind is the afternoon I watched as a man broke down in tears while we were praying for his future. I am sure it was a combination of relief for those chosen to leave and heartache for himself at the uncertainty of his own future.  His tears gave way to sobs and soon he was being held by the pastor, weeping on his chest.  I was the only woman in the room and wondered if I was supposed to be seeing such a private moment.  Yet, it is one of the moments that will embody my experiences here. If I could show you his tears and his agony and have you all care as much as I do.

I don’t even know what to tell you.  Saving everyone by removing them from here is not the answer and it won’t happen.  If only we could get more support to help keep the people fed, the babies diapered and the children in school here in Beirut. If only we could offer more training, more opportunities to expand vocational skills and opportunities for the parents to learn to read.   But what comes next?  Do these people in limbo get to go back to Syria?  Can the persecuted Christians band together in a new community and rebuild together in Syria, protected from their former family and those who threaten their life?  Will Assad really accept all these people back who have abandoned his fight to flee for their lives?  Can they ever really go back?

We cannot remove everyone from the Middle East that needs help. We cannot remove all the persecuted Christians. We must find a way to help the believers thrive where they are and dare I say help them put down roots and bloom wherever they happen to be planted, even if it is here in Bourj Hammoud.