I am alone, walking by myself down a lonely, dusty, desert road in the high mountains of Lebanon. The highest in the Levant, in fact.  Small villages have been left behind hundreds of meters down in the valleys far below.  There is no one and nothing as far as the eye can see on this sun-scorched land beyond some Bedouins and their sheep in the far distance.

Then, over the horizon, a stream of black ATVs come rolling toward me, dust blazing behind them. The men riding the ATVs are wearing all black with black face masks across their face.  I haven’t seen Mad Max, but I am quite sure I saw this scene in the previews.  For a moment, I feel like I am in a movie. Here I am, all alone on a mountain and a group of men in black is approaching me. I should be more concerned.  “This is the Middle East, this story will not end well,” you think.  And my thought just the opposite, “it is the Middle East. Everyone is so nice here.”  There I go again, believing the best in humanity. The best in humanity always seems to rise up to greet me, I truly believe, despite the dichotomy that I am walking alone in the first place because some dude with whom I went bike riding chose to abandon me when my bike broke because he didn’t want to stop riding.

The ATVers had ridden past me without a pause, as if a solo, blonde, western female carrying a bicycle helmet is something that you pass by in the mountains every day of the week.  However, one of them was quick to turn around when he spotted the broken bike.  He spoke broken English and wanted to check on me. Did I need help?  Did I want him to take the bike to town?  It was a town name that I did not recognize, certainly not the one I came from.  And Gaby was coming to get me in just half an hour, I thought.  I truly believed that at any moment he would come around the mountain road which is what I had been told.  I politely declined the invitation for help but was truly appreciative of the kind gesture. This was what I expected from people here. Always hospitable. Though on the other hand, I was strolling along the desert road because someone wasn’t even a quarter of a gentleman. 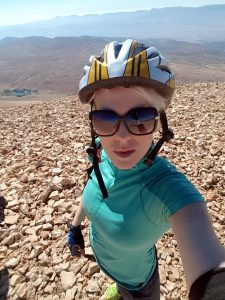 Another fine mess I had gotten myself into.  Not the first and it certainly wouldn’t be the last while I was in Lebanon, and at the mercy of people whose language I only partly speak, a people whose planning skills leave a lot to be desired.

My bike riding companion was the family friend of my most kind and gracious hosts for my weekend in the mountains.  He loved sports and outdoor activities and my hosts – my colleague, and her sisters did not. That is how it came to be that I was biking on the mountain with someone who only thought they knew what they were doing.  Lost for hours (though I didn’t know that at the time), and then he left me on the mountain to continue riding, telling me Gaby was coming to get me right before our cell service disappeared.  Little did I know that this wasn’t exactly true.

I came upon the Bedouins as I strolled down the road and they invited me in for tea and fed me goat cheese and bread.  I was grateful for the food and hydration because my water supply was running low.  I had already been on the mountain for 5 hours at this point and I had given my candy bars to “D”, my bike riding companion, because I had only half an hour left on the mountain, I thought.  Besides the hot sun was melting our only fuel source to a sorry puddle of mess. If I couldn’t eat them now they wouldn’t be edible much longer.

“D” came back for me after meeting the Bedouins, but only to tell me to run ahead and catch up with a hiking group with whom I could stay until Gaby could get me.  Now, I figured walking with a group was safer than strolling down the road alone.  Standing still, with a broken bike in the middle of nowhere sounded much more ominous. There was only one small road onto the mountain and the same one small road off the mountain.  I figured if I just stayed on the road, all would be fine.  It was the only road Gaby could be on — or so I thought. 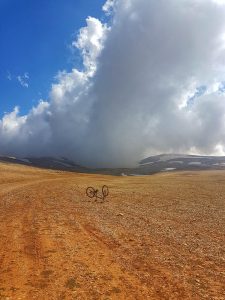 I ran ahead to meet up with the hiking group.  What I thought was going to be a short period of time quickly turned into hours in what is one of the most challenging hikes in the country.  At least I was with a good group of people, sans the snooty French girls in the group, but how was I getting off the mountain, and where was Gaby?  At this point, I ran out of water and had to bum some off the people on the hike.  The hike ended up being another 5-6 hours.  On the way back, we traversed past my broken bike and discovered that Gaby had obviously not come. And who knows where “D” went?  One of the Lebanese men on the hike insisted on helping push it all the way back off the mountain.  He also gave me his coat when we were walking through the clouds and the temperature became quite cold.  Again, always so hospitable.  We also passed by the Bedouins again, and they called us over to give us fresh sheep milk.  It was the most amazing thing I have ever tasted.  This little bit of hydration refreshed me, and it helped to keep me going.

The hike complete, the hikers now left as they had no room for me or the bike, and so once again, I am alone by the side of the mountain road.  I was relieved when the cell service finally returned as I neared the trailhead. I was able to retrieve a message from “D” explaining he had returned to Beirut. Yes, he returned to Beirut without verifying I had safely gotten off the mountain.  Fortunately, I was finally able to call my colleague requesting help.  However, being assured that Gaby was really on his way this time did not assuage my concerns as I was alone again, abandoned by the side of the road for the second time in one day. Dusk was imminent, and my cell was nearly completely dead.  I had been hours without water, only a little milk, and I had just walked 29 kilometers in mountainous, arid terrain in hot, June sun. I was preparing to use my last minutes of phone battery to tell my family I loved them…

Finally, Gaby arrived with my colleague and her sister and I was saved.

This certainly wasn’t my only adventure on this mountain.  I was in love with the village that is the gateway to the mountains and the legendary Cedars of God, and I wanted to go every opportunity I could.  I had managed to win a gift certificate to a chalet in these mountains at the annual fundraising dinner at the Life Center.  It was nothing short of a miracle, to be honest, and I was intent on using it before I left the country. Last November, my time was becoming short, and every girl I knew had bailed on my invitation to spend a weekend in the chalet. No one wanted to go to the mountains!  However, where there is a will there is a way.

Soon, I was on my own on a bus to Bsharri!  The bus driver was from Bsharri and had promised my Bsharrian colleague (the same colleague from the last story) to deliver me to the chalet.  Address of said chalet? I didn’t have because there aren’t really addresses in Lebanon, especially not in the small villages. I had the name and number of the chalet owner and I knew what the bus driver had been told and what he had agreed to.  Furthermore, after lining up the bus ride, my colleague told the chalet owner what time I was arriving and on what bus. I wanted everything arranged in Arabic so that there wouldn’t be any confusion or missed words with my own communication attempts. This, unfortunately, didn’t prevent miscommunication.  My arrival time in the mountains was something that was apparently overlooked. I am certain it is because time is always relative in Lebanon. No one actually shows up when they say they will.   But they surely don’t show up sooner either!!

The bus driver parked the bus on one side of the valley, and the last few of us ended up in the bus driver’s car as he dropped the other passengers in town. Now I was the last one in a car with a man who didn’t speak any English. None at all.  We were driving up the mountain road to the cedars when he announced that he didn’t know which “Pierre” this was. “There are many people here with the same name,” he said in Arabic.  He actually did not know where the chalet was either, and it had only occurred to him to get the information when we were supposed to be minutes away.  No problem!  I called Pierre, but Pierre was not answering his phone. We both called Pierre over and over again, still no answer.  I called my colleague, and she had no better advice, and it turns out she really didn’t know where the chalet was either.  It was now 11:30 pm when we found someone to ask for help. Surely, they knew Pierre and his chalet. They gave us some complex directions which resulted in our ending up at the dead end of a country road in front a dark and silent house.

Imagine me all by myself up in the mountains late at night in the car with a bus driver who doesn’t speak any English. The village is asleep. There isn’t really anyone around to help out.  “Boy, this is another fine mess you have gotten yourself into, Esther.” I thought to myself. My imagination running wild at what a crazy scene in a fictitious story this could become.  Meanwhile, my kind bus driver was almost in tears over the predicament we were in and the idea of Esther alone in the village with no one to accompany her.

I had only one option left. The family member of the chalet owner, he was actually the one that donated the certificate to the fundraiser. I had been trying to avoid having to rely on him for any help in the situation. Not a consistent person, he may not have left me on a mountain before, but I figured this was only because he really hadn’t had the opportunity to do so yet. Now I had to hope he could help, that he would answer his phone, that he would actually respond.  Fortunately, he did both! He happened to be on his way to the village from Beirut, and he and his brother were able to come assist me; retrieving me from the bus driver’s car.  I ended up staying at the family’s ski lodge since none of us could awaken the chalet owner.  Disaster narrowly averted and saved in the nick of time!  I got my last weekend in the mountains, and I finally got to fulfill my dream of being above the clouds at sunset. 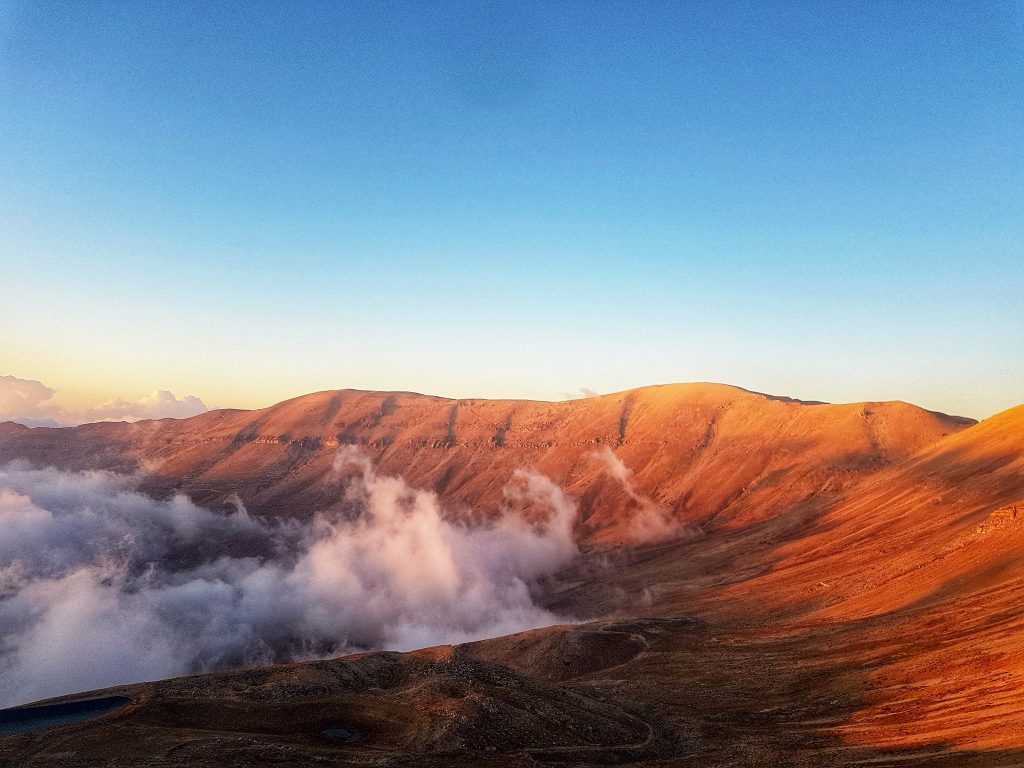 These weren’t the only predicaments I had while in Lebanon, but they are certainly two of the more adventurous ones!  I am quite certain that there are bound to be more misadventures from time to time.  Hopefully far more exciting beyond the adventures navigating the concrete jungle and subway system of NYC.